Cruises are increasingly relevant in port development so taking a look at pricing can be insightful, writes Peter de Langen.

In Spain, dues charged by the port authority for cruise ships, expressed per passenger, vary from about €1 to about €6, depending on the port and ship capacity. These costs seem below the costs for the infrastructure and facilities. As a comparison, average ‘airside’ revenues of the Spanish airport company (AENA) are more than €9 per passenger.

I acknowledge that this comparison is not like for like: the investments in airport infrastructure may be higher, but the turnaround is much faster. For instance, Barcelona’s airport handles about 40 million passengers, but the port receives about 2.4 million cruise passengers.

Regardless of cost levels, the cruise fees seem to be well below the economic value of the cruise location, often very close to the city centre. The value of attractive tourist destinations like Barcelona is huge and cruise ports often stress the economic impact of their calls for the city. In contrast, such arguments are seldom heard for airports, even though cruise passengers spend a huge part of their money on board, while airline passengers spend on hotels and restaurants.

The pricing for cruise seems not to follow commercial principles but a public sector logic, in which the value creation for the city is central. This is in line with the institutional position: whereas AENA is stocklisted, the Spanish port authorities are government owned.

This approach towards attracting cruises has a downside, especially in regions with substantial competition between ports to attract cruise calls. This leads to private profit and public loss: revenues from cruise calls are probably not enough to recover investments, and certainly not in line with the economic value of the port. For instance, in Andalucia, the ports of Malaga, Algeciras, Huelva, Cadiz, Motril and Almeria all aim to attract cruise calls, leading to very low port dues, which are in contrast with the value of Andalucia as a cruise destination.

For the whole of the Mediterranean, the conclusion is the same. The Mediterranean is a very popular cruise market with unparalleled tourist destinations such as Venice, Barcelona, Rome, Athens, Istanbul and Dubrovnik. Nevertheless, the cruise companies pay very low fees for locations close to city centres – this is a logical consequence of port governance structures in the Mediterranean, but one has to wonder whether this outcome is in the public interest.

Sea transport is the cheapest form of transport and more than 75 percent of international merchandise is carried by vessels. Yet, costs are still substantially higher than they should be. This is especially evident in Africa and the Pacific where countries pay on average 40 percent to 70 percent more than developed countries for the international transport of their imports. High costs deeply hurt consumers and producers alike and reduce a country’s competitiveness. But an effective management model to bring down costs can be gleaned from the airport industry.

Effective port governance deeply influences freight transport costs as it can lead to better maritime and hinterland connectivity, smooth trade processes, and attractive port costs. One way to reduce costs and inefficiencies at ports is to introduce private-sector participation. Private port operations typically lead to a more efficient and competitively priced port services, provided that the appropriate regulatory regime is in place. Most of the terminals are currently operated by private companies; most major port reform challenges now concern the role and institutional position of the “port authority.”

When the port authority is a branch of the public administration, as is the case in most countries, political considerations often override commercial criteria. This often leads to insufficient or unreasonably high levels of investments, as well as investments in the wrong place (often to attract employment to less developed regions) or with wrong characteristics (e.g., depth and size), resulting in an underutilization of existing port assets and erroneous port pricing decisions.

The emerging best practice model is corporatization, in which the government owns the landlord port development company but gives it full autonomy to make decisions based on commercial considerations. Corporatization of the port authority changes the organizational culture towards value-creation and investment generation for the entire port complex. For examples, the port of Rotterdam substantially improved its performance after the reform. Operating costs were reduced, while capital investments, market share and overall profits increased (see Figure 1).

Figure 1: Performance effects of the corporatization of Port of Rotterdam Authority

Corporatization does not necessarily mean privatization. Most countries are reluctant to privatize their port authorities given the strategic relevance of the ports for the economy and the public interests involved. Corporatization can result in a government-owned port development company, with a broad mandate to develop the port complex and attract new customers, both port users and tenants (e.g., terminal operators, logistics service providers, and manufacturers).

Port reform can get some inspiration from the airport industry. In many countries, airports migrated from a purely government administration to an airport corporation, thus unlocking its tremendous profit potential and generating cash from new revenue streams. According to a recent survey of the Airports Council International-North America, most airports in the U.S. and Canada produce almost as much revenues from non-aeronautical activities (parking, retail, food, hotel, and conference facilities) as from fees from passengers and airlines.

Port reforms in most countries in Europe (i.e., Netherlands, Germany, Belgium, Portugal, and France) as well as in the rest of the world (Taiwan, Canada, Indonesia, Morocco, and Oman) slowly move towards a state-owned corporatized entity. There are four main lessons to consider when embarking on port reform:

The potential benefits of turning public port authorities into truly corporatized port development companies are substantial for the port users and the society at large. Lessons learned from the airport sector’s corporatization process lead us to believe that this maybe the future of the port sector as well. 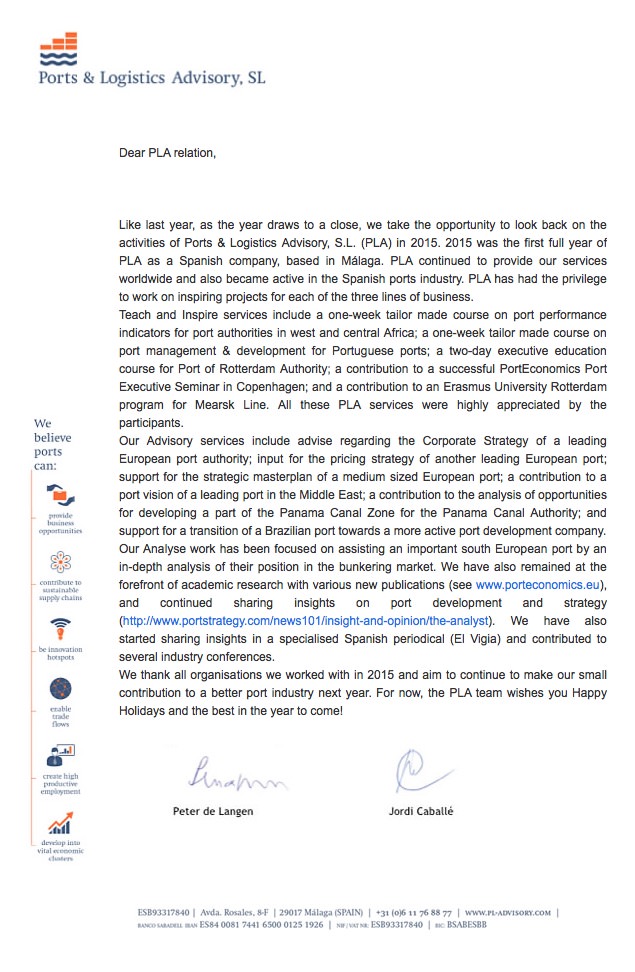